Reality star Kim Kardashian is facing harsh criticism from the public after referring to her  daughter’s  hair as a “crazy afro”. The comment was made on a recent appearance on Jimmy Kimmel Live to promote her book.  During the interview Kardashian recounted waking her daughter North up to see a baboon that was spotted in their neighborhood.

The comment can be heard around the 3:00 minute mark.

Many are up in arms over the stars description of her daughter’s hair, which comes just weeks after gossip site Hollywood Life called North West’s hair “unruly” and “wild” on Twitter. Eventually the tweets were changed after the public protested. 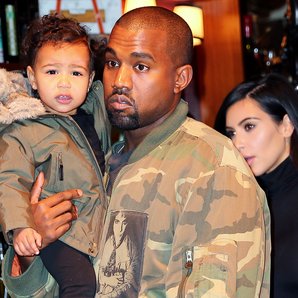 This isn’t the first time controversy has been sparked over a celebrity child’s curls. We all remember the massive debate over Beyonce and Jay-Z’s daughter, Blue Ivy and the criticism they received from some over how her hair looked. Now it seems it is Kanye and Kim’s turn to weather public scrutiny.

What do you think? Were Kim’s comments innocent or were her comments insensitive and out of line?